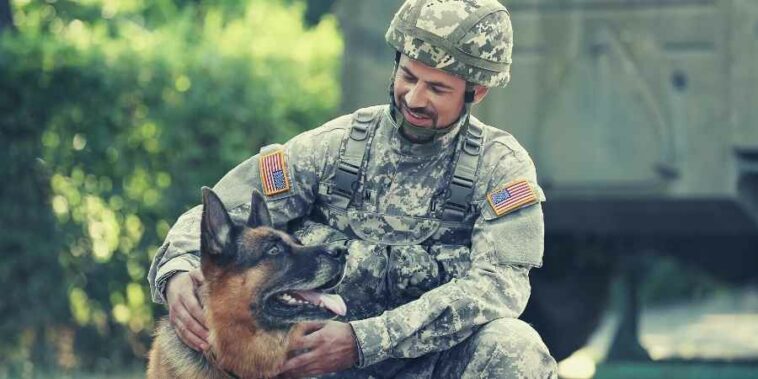 The Best Dog Breeds For Military Use

The US military has used pooches of many different breeds to serve alongside their soldiers. However, some stand out as being the best military working dog breeds, particularly adept at the tasks they were assigned to.

Although the military uses an assortment of dogs today for several purposes, such as explosive detection and search & rescue missions, it is worth noting that certain breeds appear to make better service dogs than others. The requirements for a dog’s working ability can change at any time based upon what tasks need to be accomplished and how many dogs are available to meet the demand.

Trainers look for dogs that are resilient, have a strong drive to work, and are intelligent. Dogs that have been bred for these traits are more likely to be successful as military working dogs.

Which Breeds Are Used As Military Dogs?

Military dogs serve in a variety of roles including as sentries, messengers, trackers and search and rescue dogs. They are also used in drug and bomb detection. The breeds of dogs used by the military vary depending on the task that they are assigned, but the most common breeds are German Shepherds, Labrador Retrievers and Belgian Malinois. The US armed services use around 2,000 military dogs.

The preferred breeds include German Shepherds, Belgian Malinois and Dutch Shepherds. This is because these three breeds are known to have a high drive for work which makes them more suitable as working dogs in general.

The following list looks at the best military working dog breeds used by the United States:

Although not originally used by US forces, this breed quickly became a favorite among American soldiers because of their versatility and trainability. Their working ability in military situations are so respected that they are often referred to as “America’s dog“.

This is currently considered an all-around excellent choice for working with the military when it comes to assigned tasks such what might be described as mundane or non-glamourous jobs. They are very competent in roles such as search & rescue, drug detection and explosive detection; however they are most widely used by the military for their exceptional water rescue abilities.

This breed is very intelligent and highly energetic, which makes them especially good at assigned tasks requiring speed, precision and endurance. They are also trainable to act under any conditions; hot or cold weather, wet or dry environments.

Although this breed does require some sort of mental stimulation in order to be happy (such as agility training), they are no more high-maintenance than other similar breeds when it comes to upkeep in the home environment. However in traditional military settings where all sorts of different terrain might be encountered, this breed is often favored for their ability to cope with almost any environment. [ click here for more info ]

This breed combination represents the best of both worlds, possessing the mental capability and physical strength found in the German Shepherd Dog along with many of its traits that are advantageous in assigned tasks requiring speed, precision and endurance. They are also trainable to act under any conditions; hot or cold weather, wet or dry environments.

Although this breed does require some sort of mental stimulation in order to be happy (such as agility training), they are no more high-maintenance than other similar breeds when it comes to upkeep in the home environment.

How Are The Best Military Working Dogs Selected?

Dogs are selected for the program after they are between 1.5 to 3 years old. The dogs can be purebreds or crossbreeds, but must have a strong prey drive. Dogs that pass an initial assessment become service animals in 4 to 6 months of training. Military working dogs go through 16 weeks of training that includes obedience, tracking, and detection. They are then deployed with their handlers to serve in combat zones for 5 years.

Some of the key characteristics among the best military working dog breeds are strength, agility, obedience, and aggression. Dogs that display these characteristics are more likely to be successful in military service.

The United States Department of Defense has a breeding program called the Military Working Dog Breeding Program. The program started in 1991, and currently there are kennels on several military bases. One of these is located at Lackland Air Force Base in San Antonio, Texas.

The breeding program is responsible for maintaining a database of suitable dog breeds. The military will cross breed dogs in order to produce the best traits. This ensures the superior working ability and characteristics of each future generation of dogs.