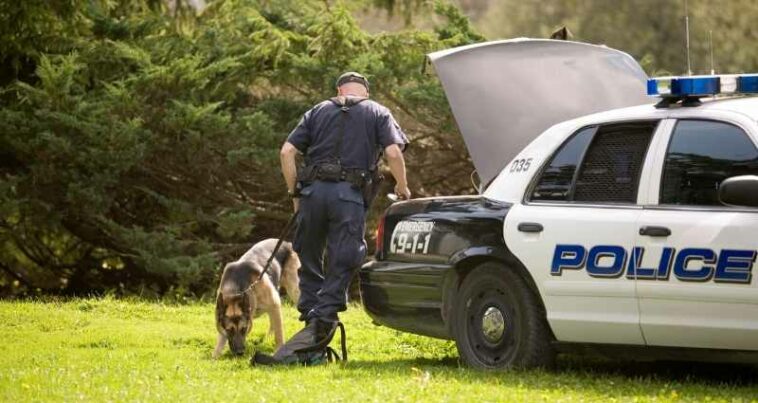 Cadaver dogs are specially trained dogs that are used to locate human remains. The term “cadaver dog” (also referred to as forensic detection dogs) can refer to any type of dog that is trained to find human remains, but it is most commonly used to describe dogs that are specifically trained to find corpses. Cadaver dogs are used by law enforcement agencies, forensic scientists, and search and rescue teams. Their skills can help to save lives and find evidence that can help to solve crimes.

Cadaver dogs have a keen sense of smell, and they can be trained to alert their handlers when they find a corpse. The dogs will usually start by sniffing the ground and then moving their noses up and down in a zigzag pattern. If they find something, they will bark or whine to let their handler know.

There are many breeds of dogs that are used as cadaver dogs. Some of the most common breeds include German Shepherds, Labrador Retrievers, and Belgian Malinois, Bloodhounds, Spaniels, Golden Retrievers. These dogs are specifically trained to locate the remains of humans, and they are often used in search and rescue missions.

Cadaver dogs are often used in crime investigations, and they can help police officers locate evidence or bodies that may be hidden underground or in other difficult-to-reach places. They can also be used to identify human remains after a natural disaster.

What Cadaver Dogs Do

These dogs are specially trained to sniff out human remains even when those remains are buried deep within the ground and have been there for years. They’re able to detect decomposition gases that rise from the ground over time and can still be detected long after a person’s death. This makes them an invaluable tool in helping to solve crimes and bring closure to families who have lost loved ones.

Cadaver dogs are used by law enforcement all over the world to help investigate crime scenes. In some cases, they can be the difference between finding a victim’s body and never knowing what happened to them. They can also help to identify suspects or victims in cases where there is little evidence available.

Due to the sensitive nature of their work, cadaver dogs are often handled by trained officers who have a deep understanding of how these dogs work and what they’re capable of. These officers work closely with the dogs to help them find the bodies of victims and to provide comfort to families who have lost loved ones.

The work of cadaver dogs is vital in helping to solve crimes and bring closure to families. These dogs are true heroes who use their incredible sense of smell to make the world a safer place for everyone.

There are many famous cases that have been solved with the help of cadaver dogs.

Cadaver dogs are a valuable tool in the search for missing persons. They have been used in many famous cases and have helped to solve them. Cadaver dogs are also being used more and more in recent years to help find victims of natural disasters.

Cadaver dogs are trained to find corpses through a process of scent recognition. The dogs are exposed to the scent of human corpses at an early age, and they are taught to associate that scent with finding a dead body. The dogs are also taught to ignore other scents that may be present at a crime scene, such as the scent of the criminal. This is important, as it allows them to focus solely on finding the victim’s scent.

These dogs are also used to find human remains. They are able to do this by following the scent of the person’s blood or other body fluids. In some cases, cadaver dogs can even find bones that have been buried.

One of the most famous cases was the disappearance of Chandra Levy. Chandra Levy was an American intern who disappeared in 2001. Her body was found in a park in Washington D.C. in 2002.  Although handlers searched for remains with cadaver dogs, Levy’s remains were actually unearthed by a pet dog searching for turtles with his owner.

A cadaver dog named Twist owned by an expert dog handler named  Eloise Anderson was deployed to search the Petersons’ home and a Modesto warehouse storage space where Scott Peterson kept his fishing boat and work equipment. During the search of the warehouse, the dog led Anderson twice to a bathroom located in the back of Peterson’s storage unit.

Another dog, Trimble, followed a scent from near the parking lot at the Berkely Marina and pulled Anderson from that location to a pylon near the end of the pier.

Cadaver dogs have also been used in more recent cases. In 2019, cadaver dogs were used to search for missing persons in the aftermath of the Camp Fire in California. The dogs were able to find the bodies of several victims who had been lost in the fire.

More than 300 forensic detection dogs were used extensively for tireless search and rescue operations at the site of the September 11 attack on the World Trade Center. The dogs were from all over the country, and they worked day and night to find survivors or victims’ remains in the rubble. They were a vital part of the recovery effort and are considered to be some of the most heroic animals in history.

Buster was highly trained and worked alongside his owner on numerous cases. In the Black Dahlia case, which took place in 1947, Buster was brought in to help locate the missing body of Elizabeth Short. Buster sniffed out a buried corpse in a vacant lot near where Short’s body had been found. This led to the arrest and conviction of Dr. George Hodel, who was later implicated in other murders as well. (Read more about Buster here)

Buster continued to work on cold cases throughout his career. In 2004, he helped solve the murder of Peggy Reber, who had been killed in her home in 1992.

Cadaver dogs are a valuable asset to law enforcement and the military. Their skills can help to save lives and find evidence that can help to solve crimes.

Training a cadaver dog generally starts when the dog is about 8 weeks old. During this time, the dog is introduced to different scents, including the scent of human corpses. The dog will also be exposed to other objects that may be found at a crime scene, such as weapons or blood.

The process of training a cadaver dog can take up to two years. The dog must be able to identify the scent of human corpses and ignore other scents that may be present at a crime scene. Cadaver dogs are also learn how to search for clues and evidence that can help to solve crimes.

In addition to law enforcement, cadaver dogs are also used by the military. Dogs can be used to find missing soldiers or to locate the bodies of soldiers who have been killed in action. Cadaver dogs can also be used to find victims of natural disasters, such as earthquakes or hurricanes.

Cadaver dogs are an important tool for law enforcement, and they can help investigators solve cases that would otherwise be impossible to solve. Thanks to these dogs, many families have been able to find closure after the death of a loved one.