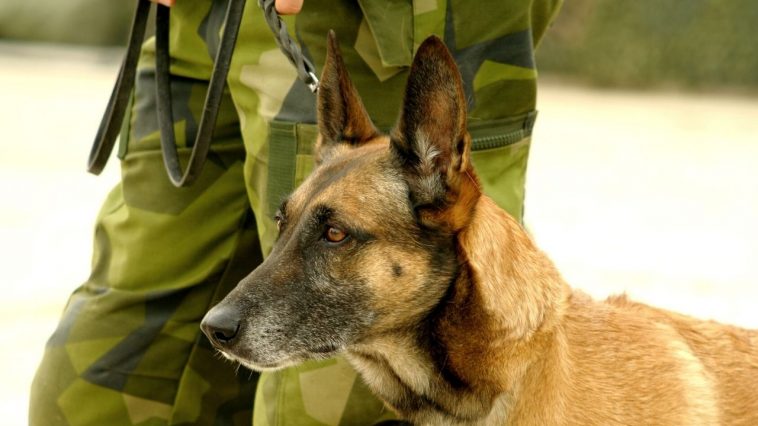 Which Breeds Are Favored As Military Dogs?

The US military has used pooches of many different breeds used as military dogs serving alongside their soldiers. However, some stand out as being especially adept at the tasks they were assigned to.

The military working dogs of today serve several purposes, such as explosive detection and search and rescue missions. Certain breeds appear to make better service dogs than others.

Trainers look for dogs that are resilient, have a strong drive to work, and are intelligent. Dogs that have been bred for these traits are more likely to be successful as military working dogs.

Which Breeds Are Used As Military Dogs?

Military dogs serve in a variety of roles including:

The breeds of dogs used by the military vary depending on the task that they are assigned. but the most common breeds are German Shepherds, Labrador Retrievers and Belgian Malinois. These three breeds are known to have a high drive for work which makes them more suitable as working dogs in general. The US armed services use around 2,000 military dogs. (Learn more here about the best breeds of military working dogs!)

The following list looks at military working dogs in the United States in the order of which breed has been in use for the longest period by US forces:

Although not originally used by US forces, the German Shepherd breed quickly became a favorite among American soldiers because of their versatility and trainability. Their working ability in military situations are so respected that they are often referred to as “America’s dog”.

One American canine her was a German Shepherd named ‘Sentry’. Sentry protected his regiment from a surprise attack and was awarded a medal for his bravery by General John Pershing, who was then the Army Chief of Staff. Sentry died shortly after the end of World War I at the age of 5 from illness caused by injuries sustained during battle.

In April 1918, an American soldier named Lee Duncan discovered Sentry’s pup among some ruins. He managed to get permission to adopt the dog and brought him back to the United States with him where he looked after him for eleven years before he died in 1939. Duncan became a famous animal trainer and many movies were made about him and his dogs, one of whom was Rin Tin Tin who gained considerable fame after starring in several movies.

This is currently considered an all-around excellent choice for working with the military. Their specialty is working with Combat Tracker Teams (CTRT). They are very competent in roles such as search and rescue, drug detection and explosive detection. They are widely used by the military for their exceptional water rescue abilities.

Jake was a black labrador who served as a search and rescue dog following the September 11 attacks. A search and rescue dog is a dog that is trained to locate people who are missing in disasters such as earthquakes, hurricanes, and building collapses. Many of these dogs are also used to find deceased victims.

Jake worked at the World Trade Center site and helped to find survivors in the rubble, and was considered a hero by New Yorkers. After the attacks, Jake also worked in New Orleans during Hurricane Katrina to find people who were stranded or lost. He was an amazing dog and helped to save many lives.

This breed is very intelligent and highly energetic, which makes them especially good at assigned tasks requiring speed, precision and endurance. They are also trainable to act under any conditions; hot or cold weather, wet or dry environments. Although this breed does require some sort of mental stimulation in order to be happy (such as agility training), they are no more high-maintenance than other similar breeds when it comes to upkeep in the home environment. However in traditional military settings where all sorts of different terrain might be encountered, this breed is often favored for their ability to cope with almost any environment.

On Oct. 27, 2019, a 5-year-old Belgian Malinois military working dog named Conan took part in the Barisha raid, which resulted in the death of the leader of ISIS. Conan was injured after chasing Baghdadi down into a tunnel where the terror leader detonated his suicide vest.

Conan was responsible for finding several improvised explosive devices (IED’s) throughout his deployment in Iraq leading to many lives being saved from injury or death from the explosives. Conan joined a long list of heroic military working dogs.

This breed combination represents the best of both worlds, possessing the mental capability and physical strength found in the German Shepherd Dog along with many of its traits that are advantageous in assigned tasks requiring speed, precision and endurance. They are also trainable to act under any conditions; hot or cold weather, wet or dry environments. Although this breed does require some sort of mental stimulation in order to be happy (such as agility training), they are no more high-maintenance than other similar breeds when it comes to upkeep in the home environment.

Military working dogs, or MWDs for short, are a vital asset to the military. These brave canines have been instrumental in saving countless lives and should be honored as such. In this article we’ve shared information about why the breeds used as military working dogs are so important..

If you know someone who is looking for ways to give back by supporting our troops, please share this post with them! We hope that through education on these courageous animals, more people will understand what it takes to train a canine hero – from their rigorous training all the way up until deployment when they put their skills into action every day.