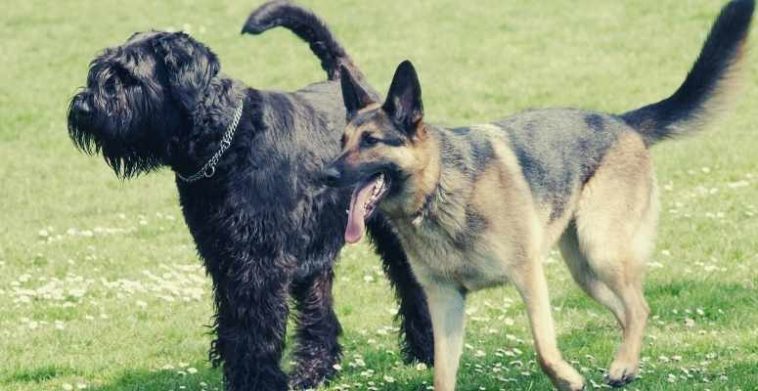 Q: How long should my dog’s name be?

Naming your dog is a very personal choice. A lot goes into naming our pets…their personalities, our personalities, their quirks, their colors, size, breeding. Sometimes it’s an inspirational name that just begs to be assigned.  For example, this bulldog  has a name suitable for the largest Great Dane: Theodore James Franco Gatsby.  Not sure but guessing he probably ended up getting called “Teddy”.

Frequently, show dogs have very long names for a variety of reasons having to do with breeding and lineage. Others are just fun! For instance the dog that won the Purina 2012 National Dog Show was named “GCH Afterall Painting the Sky”.  Probably not the name they used to call him to dinner!

Q. How many syllables are too many in a dogs name?

It is no mistake that dog commands are short and curt. Stay, down, heel, speak,  fetch, bring. Why?  These are easily recognizable for dogs.

Should you name your dog long names? You may love the name Aphrodite, but it can be cumbersome when you are trying to give your dog a command quickly. Also, you can be sure that it’s going to be shortened up to some sort of nickname before too long.  Shortening the name to “Aph” when speaking to or calling your dog  may be simpler, but the soft sounds can be mistaken by the dog for other words or commands. Long, complicated dog names will usually end up in a nickname.

Q. What sounds are best in a dog name?

Dogs are pretty smart so they can pick up about anything over time. However, there are a few simple guidelines to help you find the best sounds in a dog name.

Choose ‘sharp’ sounds: Using sharp or hard sounds in the beginning of a dogs name is usually a better choice. For instance, softer letters in names like “Fanny” may be harder for them to discern than a name like “Duke”.

Avoid names that sound like commands. Dogs – especially puppies – may have a harder time discerning “Shay” from “stay”. Some breeders and trainers avoid “s” words altogether.

Q. Why does it matter what I call my dog?

Most dog owners want to fully integrate their pet into their lives. They become part of the family, living in our homes, walking and playing in public, spending time around people and other animals. While choosing a puppy name is a lot of fun, it can also be a safety consideration.

Obedience is super important as begin to train a young puppy. Not only does it make life interesting for both of you, but in the event that there is an emergency you want your dog to come to you immediately.

Giving your dog a name (or a nickname you use consistently) that is clear and succinct gives both dog and owner instant response in the event of an emergency. For instance, if your dog gets loose and starts to run toward the road, it’s much easier to say “Blue, here!” than it is to say “Espresso, come!”

Q. Nature vs. Nurture in a dog name?

Just like with people, what you call your dog can influence how people see and respond to him or her. For example, calling your dog Savage or Killer may have different results depending upon whether it is a large Giant Schnauzer, or a Morkie. Avoid using inappropriate names like curse words or defensive slang. Please.